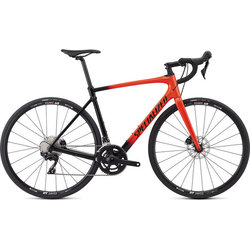 Specialized Roubaix Sport
Hitting a sweet spot between performance and value, the Roubaix Sport was designed to thrive on long rides through rough country. The lightweight frame has been constructed from our FACT 9r carbon fiber. Its stiffness levels are also off the charts and, compared to the SL4 iteration of yesteryear, you'll experience a whole new, faster, and more efficient geometry. Through some sophisticated engineering, however, we've managed to keep the same fit, feel, and position that we've all come to love from the SL4, and kept it consistent throughout the size-range with our Rider-First Engineered construction. Of course, you're probably thinking, "get on to the suspension thing up front." We call it Future Shock, and essentially, it's a piston in the head tube with 20mm of travel. We developed this technology in partnership with McLaren Applied Technologies, and the result of this is a host of drastic performance improvements, namely in the vertical compliance department. Without giving a physics lecture, we found that focusing on vertical compliance, instead of fork splay, meant that we could improve smoothness, speed, and comfort in one fell swoop. And of all the bikes that we've tested with our Rolling Efficiency Model, the Roubaix outperforms anything on the market. Lastly, we spec'd the Roubaix Sport with 105 11-speed mechanical shifting, hassle-free Tektro Spyre mechanical disc brakes, and DT R470 Disc wheels that have been cased in our Turbo Pro 28mm tires. - Features our Rider-First Engineered design that ensures every frame size has the same legendary responsiveness and smooth ride quality that you'd expect from a Roubaix. The FACT 9r frameset holds its own with our highest-end carbon offerings, with the ideal blend of light overall weight and targeted stiffness, while the all-new Future Shock "suspension" system at the cockpit delivers a revolutionary degree of comfort and control. - DT R470 Disc wheels feature reliable, sealed cartridge hubs, and 24 front and rear spokes that keeps weight low and durability high. - Shimano's 105 shifting and hydraulic disc brakes ensure reliable shifting and stopping power in a variety of conditions. 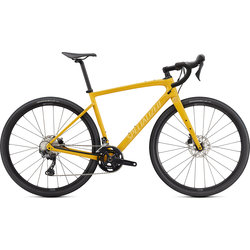 Specialized Diverge Sport Carbon - 2021
$2,900.00
Whether your goal is to escape on gravel back roads, far from cars and crowds, or drop the hammer at the front of your favorite gravel race, no bike does it better than Diverge. It's quite simply the fastest, most capable—and just maybe the most fun—bike we've ever made, delivering a ride that's quick and lively under power, but stable and confidence-inspiring when the terrain gets rough. From Future Shock 1.5 and all-new gravel geometry to category-leading tire clearance, the Diverge represents everything we've learned over more than 40 years of riding road, gravel, and dirt. The Diverge writes an entirely new chapter in the gravel bike category, so you can dream up entirely new rides. It's the ultimate getaway vehicle. Gravel riding may be a 'new' sport, but our Diverge Sport Carbon has been developed thanks to over four decades of experience. It's got our Future Shock 1.5 and a FACT 8r carbon frame for a fast, confident, and comfortable ride on roads, in the dirt, and over thick gravel. With gravel-inspired Shimano GRX 600 1x11 mechanical shifting and DT Swiss G540 wheels, the Diverge Sport's as capable as it is versatile. With Kanza winning Pathfinder Pro 38mm tires you're ready to ride as fast and as far as you want. - Nothing unlocks a bike's capability like tire clearance, so we gave the new Diverge a whopping 47mm of tire clearance with a 700c wheel and 2.1-inch with a 650b wheel. Thanks to a drive-side chainstay utilizing a machined alloy beam behind the chainrings, we've created clearance without using a fragile dropped chainstay design or increasing chainstay length. - Speed, control, and confidence—Future Shock 1.5 is an ideal technology for the gravel rider. With 20mm of axial compliance, Future Shock 1.5 is progressively tuned to keep you confident and in control, able to keep the power down and stay off the brakes over rough dirt roads and in thick loose gravel, all while keeping your hands, arms, and neck fresh. - We tossed gravel geometry 'status-quo' out the window. The new Diverge has the most progressive geometry we've ever created for a drop bar bike, giving riders a capable and stable bike in the dirt, that still feels responsive and nimble on the road. We've increased the frame's reach and introduced a slacker head tube and a longer offset fork. All this creates incredible confidence with a planted feeling in the dirt, while spec'ing shorter stems keeps the overall cockpit length the same and the steering lively. We've kept the bike's BB low to increase stability, but high enough to utilize with 650b wheels if that's your jam. - We've given the Diverge plenty of rack mounts, including fork and top tube mounts, to ensure you can take what you need, no matter how far you plan to go, or how long you plan to stay out. - With a FACT 8r carbon frame, the Diverge Sport frame is incredibly capable and race bike light. Pin it for your local dirt climb KOM, or grind up a giant backcountry peak, the light and lively Diverge will get you there faster. 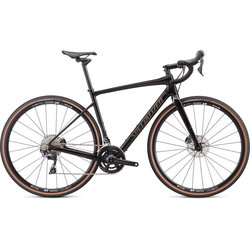 Specialized Diverge Comp Carbon
$3,750.00
While the real fun starts where the road ends, you still need a bike that'll get you there—one bike that shreds flowy singletrack, gravel, and traditional roads with equal authority. A more capable road bike won’t cut it, nor will a more road-worthy 'cross bike for that matter. No, you need a dedicated gravel bike like the Diverge. First and foremost, it's fun and always down for a good time, but with a progressively-tuned Future Shock, our fast and stable Open Road Geometry, and plenty of tire clearance, it redefines the possibilities for adventure on a drop-bar bike. - Clearance for either 700x42mm or 650bx47mm tires? Check. Three water bottle mounts, mounts for racks and fenders, and our Road SWAT kit. The Diverge not only has everything you need for pretty much any pedal-powered adventure—whether it's gravel racing, bikepacking, or weekend shredding—and does so at a frame weight that's close to today's high-end road bikes. Sure, you might be thinking more plaid flannel than Polka Dot Jersey, but you'll thank us on your next dirt climb. - You can think of the Diverge's geometry as a road version of a modern trail bike. It provides playful handling and predictable steering for endless dirt skids and mid-corner drifts, but keeps stiffness up to snuff for your inner-racer. Along with a bottom bracket that's over a half-centimeter lower than the previous Diverge, we also slacked-out the head tube angle, shortened the chainstays, and made a shorter wheelbase. The result? A bike that performs equally well over both the dirt and road. - There's only so much that wider tires with lower pressures can absorb when it comes to bumps, but this is where our Future Shock comes into play. It not only soaks up bumps with ease, but it also adds the benefit of extremely predictable handling. That's because the wheelbase isn't lengthening when you hit a bump, so when you dive hard into a turn, you won't be surprised by under-steer or sloppy handling. The Diverge's version also gets a special treatment featuring a progressive spring that makes this technology more suitable for off-road applications, where stiffer suspension is often needed to soak-up larger bumps and obstacles 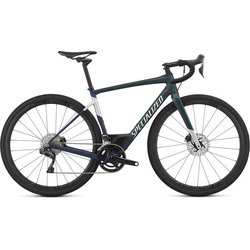 Specialized Men's Diverge Pro
$5,694.95 $6,700.00 15% Off
If you believe that a wandering heart and a healthy sense of exploration shouldn't come at the cost of five mortgage payments, we're with you and so is the new Diverge Pro. The Diverge is more capable than ever. And with the constant goal to best meet your needs, we took your number one request into account—tire clearance. The new frame will comfortably fit up to 700x42mm tires or 650b x 47mm tires. Along with tire clearance, weight was a large factor in the development and taking some design cues from the development of the Roubaix, we developed a sub-900-gram FACT 9r carbon frame that's one of the lightest in the category. Actually, it's pretty damn light, even if your intent was more Polka Dot Jersey than hunter's plaid flannel. Next up, we moved away from a traditional 'cross geometry, instead opting for something that hasn't been seen before—our Open Road Geometry. You can think of it as a road version of modern trail bike geometry. It provides playful handling and predictable steering for endless dirt skids and mid-corner drifts. The geo features a bottom bracket that's over a half-centimeter lower than the previous Diverge, a slacked-out head tube angle, short chainstays, and a short wheelbase. These changes make for a bike that's not only fun in the dirt but also performs well on the road. And while riding gravel and dirt roads on a road bike may add to the adventure, there's only so much that wider tires with lower pressures can absorb, in terms of bumps. With this in mind, we implemented a new version of our Future Shock into the Diverge design. It not only soaks up bumps with ease but also adds the benefit of extremely predictable handling. That's because the wheelbase isn't lengthening when you hit a bump, so the front end of the Diverge keeps the same effective head tube angle. In other words, when you dive hard into a turn, you won't be surprised by under-steer or sloppy handling. Unlike the original Future Shock (found on the Roubaix), the Diverge's version features a progressive spring that makes this technology more suitable for off-road applications, where stiffer suspension is often needed to soak-up larger bumps and obstacles. For the spec, you'll find the intersection of high performance and pure grit, with a Shimano Ultegra Di2 groupset, hydraulic disc brakes, a Praxis Zayante Carbon crankset, and carbon Roval CL32 Disc wheels. - The FACT 9r carbon frame features our adventure-bound Open Road Geometry, Future Shock Progressive suspension with 20mm of travel, and front/rear thru-axles, making it the ultimate tool for your next adventure. - The lightweight FACT carbon fork is plenty stiff, aiding in handling and a light overall weight. - Shimano's Ultegra Di2 with hydraulic disc brakes not only offers exceptionally smooth, crisp shifts, but it provides incredible stopping power and modulation.
Page 1 of 1